Yesterday I had my first U/S and blood work since starting the stims and it was pretty lack luster. My doctor didn’t really mention anything about my follicles or how they were looking. From some of your posts I was seeing a little feedback you ladies got from your Dr on this appointment about all that stuff. That, coupled with my dr looking like he was in a hurry to get out of there after he examined me of COURSE made me feel like something was wrong.

Anyway, the nurse called me last night to tell me he wanted me to start on 75iu of Menopur last night.

Holy shit, first off let me say that is a LOT of crap to be injecting at once. It felt like dinner. My nurse had shown me how to mix everything in that teaching appointment I had before I started, but of course I had forgotten every bit. I had to read through the instructions to figure it out. Of course it was not clear at all how much water I should use. I kept seeing examples that were for 150iu using 1cc of water, so that’s what I used for my 75iu. I had no idea if that was right or not.

But the really crazy thing to me was that out of the literally 5 bags of different syringes, none of them were labeled for use with which medicine, nor were the needles. I had no idea which I was supposed to use. They really should have a little note on them that says “For Use with Menopur” or whatever. So far the shots have been self explanatory. The Lupron came with it’s syringes and the Gonal F is a pre-filled syringe, easy peasy.

Also, I was only sent enough Menopur for 5 days, I’m hoping this is right! I’m not excited about having to order more medicine. I emailed my nurse about this, but I’m just wondering how many days you ladies who have done or are doing a Menopur protocol were on it for? 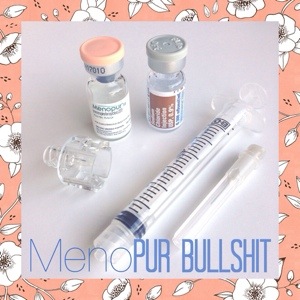