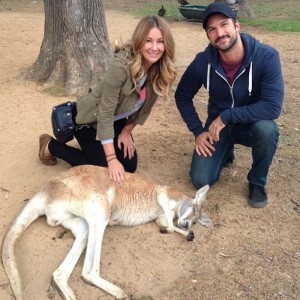 We are an infertility/IVF success story!  Our son River Blues was born in May 2015!  He’s an absolute joy.  I’ll continue to blog about our experiences with IVF as well as being a new mom.

Hello, I’m Kate!  I’m a Hypnotherapist by day, and run a mismatched fine china rental company called Sugarbaker & Toad, well, also by day.  #TourWife to my awesomely supportive, musician husband Jordan.  We live in sunny Southern California, and lead pretty busy lives, which makes this long process of waiting for our baby a little more bearable I think.  We’ve been TTC since we were married in September of 2010.  Although he travels for a living, we’ve made a pretty stellar effort to always be together at the right time of the month.  So after a year, when it still wasn’t happening for us, we decided it was time for us both to get checked out a little more in depth (eh hem, so to speak) and see if there was possibly something going on.

My doctor felt that, with my symptoms (painful cramps, etc), there might be a chance I had Endometriosis, and we scheduled a laparoscopy so he could check it out.  There was also a tiny piece of something showing in my uterus during in my ultrasound.  My doctor felt that this was a uterine septum.  This meant I had a “heart-shaped” uterus, which is, like, totally adorable, but not very conducive to getting or staying pregnant.  I found out that these can be hereditary, but a lot of women never knew they had them.  My Grandmother had 2 full and completely separate uteruses!  She carried 5 healthy babies to term, so she probably didn’t even have the foggiest idea about it.  The only reason we knew this about her was because the Gynecologist that performed her hysterectomy in their small town in Michigan was a family friend, and got drunk with my mom one night at a bar and spilled the beans!  Grandma was very private and probably would have been mortified to know that.  But having this information explained my case a little better, and even though there was really only a slight hint of a septum showing in my ultrasound, my doctor was already prepared to perform a full resection at the time of my laparoscopy.

Both things were confirmed during my laparoscopy, I had a rather large septum running down the middle of my uterus, and I also had stage 3 of 4 endometriosis.  The doctor performed a D&C and a full septum resection at this time.  Things were looking pretty good in there after the procedure, but the doctor did let me know that sometimes the septum can grow back and that I may need another procedure down the line.  I was leaving in less than a week for 2 months to go on tour, so I wasn’t able to do the standard follow-up appointment right away.  I got checked out when I got home in August, and sure enough, part of the septum had returned.  I had my second resection at the beginning of September.

Although things check out pretty well with both of us now, we still haven’t been able to get pregnant on our own.  We decided some time ago that IVF might be our best bet, but we kept putting it off because it’s SO much money, and they were telling us that we should be able to do it on our own.  Now that it has been a full year of trying again without the septum or endo in our way and we still aren’t pregnant, and with 35 just around the corner for me, we are ready to make the leap into the exotic land of IVF.

One thought on “About Us”