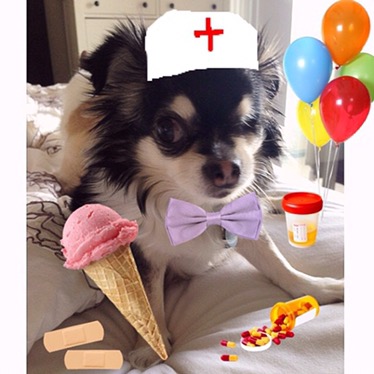 My grandma was smart as a whip and “with it” pretty much until the end of her life, which happened to be just a week shy of her 101st birthday.  In her late 90s she was still reading Russian spy novels, kind of who-done-it murder mysteries where it’s important to keep all of the characters straight, and they all had last names that started with “Zh” and contained 47 letters, random Qs and a hieroglyphic of a bird.  Grandma was a force.

There were really only a few times you could “catch her slippin” and only in the last year or so of her life.  A couple times while holding my tiny Chihuahua Booger on her lap and stroking his neck she called him a “good kitty” which really could have been anyone’s mistake.  He was actually more rodent than canine.  The other time was when she would repeat the same conversation over and over, even if she had just finished it 5 minutes earlier.  But it was always the same conversation and it always started with her asking me the same question, “could you ever be a nurse?”

She would go on to talk about how she didn’t think it was something she could ever do, and that the people who could were so exceptionally marvelous.  In her 100 years in the planet, with all of her experiences and everything she saw, at the end of her life what struck her the most was that there were people out there selfless enough to be nurses.

Although she never required a lot of what nurses have to offer personally, all these things added to her appreciation of them.  But there was one thing that nurses provide I think she valued most, and that’s dignity.

Dignity was huge to my grandmother and it’s something that nurses provided for her in a big way at the end of her life.

It’s not easy as an adult living without some or all of your independence.  It can be very difficult needing to lean on other people or have them care for you.  No matter what your restriction nobody loves asking for help, especially from loved ones.  Nurses not only provide the care, but they do it in a way that preserves dignity.

I’ve had a lot of instances where nurses have saved me. Through surgeries in my life and having my baby and even while TRYING to get pregnant, nurses have been by my side.  My mother in law is a nurse, and when it’s midnight (3am where she lives) and I’m worried about River’s poop or he has hives, she’s the one on the phone with me talking me through it.  After I had my baby, one of my mom’s dear friends who has been a NICU nurse for 30+ years was the one answering my questions and sending me literature and words of encouragement every step of the way.  This past week when I collapsed at my ultrasound appointment it was the nurse Raelyn who was literally holding me up on the toilet and who revived me with smelling salts, called the paramedics and my husband and then helped me get my pants on before 9 soap opera hunk EMTs showed up to the bathroom.  In the ER as I was losing 4 liters of blood in a matter of minutes and I had swarms of medical people buzzing around me and shouting things to each other that I didn’t understand, it was the nurse with the green eyes who kept getting close to my face and smiling and squeezing my hand to tell me I was doing great.  It was this same nurse who I turned to in the operating room moments before they put me under that I looked at with tears in my eyes and told I was scared.  Even with a mask on, I could feel her smile as she reassured me.  She said “you have the best people around you right now, we’re going to take care of you.  I promise.”

I love nurses so much.  Happy National Nurses Week!

There was an error retrieving images from Instagram. An attempt will be remade in a few minutes.